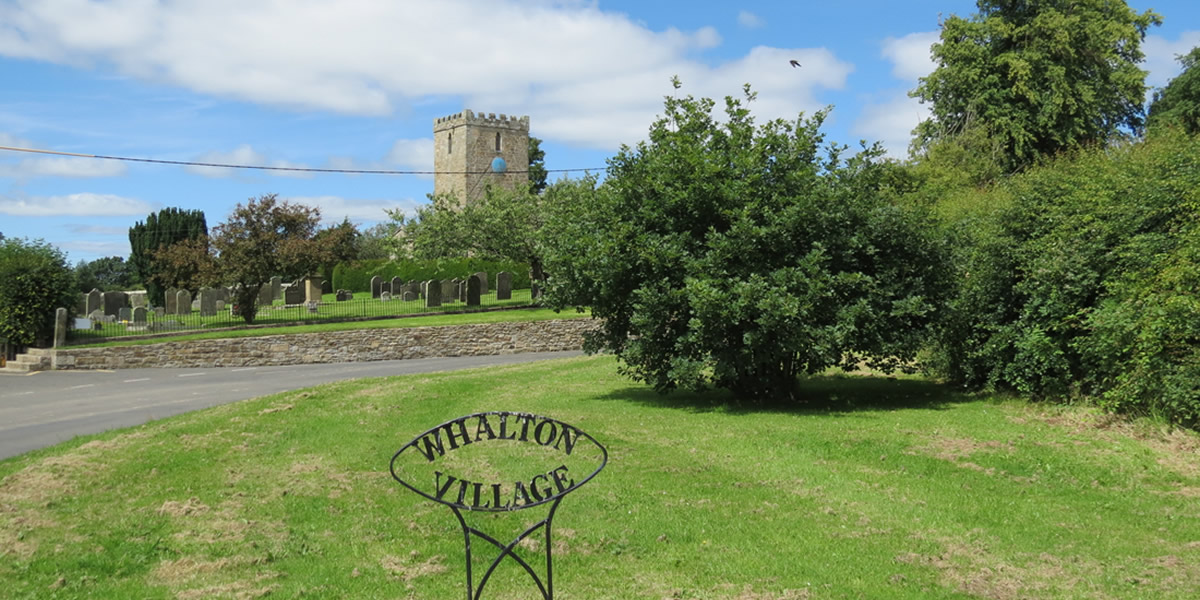 Whalton. No one knows for sure where the name originates but it is possibly one of “Wald” (wood) “Walh” (farm worker) or “Walesc” (foreigner) plus “Tun” (Hamlet or Farm). There have been many spellings in the past 1000 years! However, place names are the most ancient and enduring of all the words in our language – and since all the above names emerged before 700AD - we can be pretty confident that Whalton has been a thriving village and economic entity for a very long time indeed.

There is plenty of material elsewhere on this site about the Church, Manor House, School, Pub and Village Hall – even a more detailed village History - but what is it that typifies the soul of this place? Well, to start with it is a handsome and prosperous place. Visitors often compare the main street to the Cotswolds stone villages of Gloucestershire and that’s not a bad description. Old stone on a south facing slope with a sprinkling of grand buildings and the odd ancient mystery give the village that comfortable and timeless look.  It sits squarely in an agricultural heritage with working farms and pasture all around. Farming people are among the most active in village life. A surprising proportion of Whalton people have been here for many generations and some have even moved back here having spent their working lives elsewhere. Inevitably, many people who live here go to work elsewhere but still play their part in sustaining a strong local identity. Newer luxury developments and conversions close to the village have seen the odd celebrity joining the community.  Whalton certainly has a solidity and a confidence which many might envy.

It is a place of strong personalities such as the redoubtable late Mrs Blackett - fondly remembered for her forthright opinions at public meetings and her hospitality to Carol Singers but equally celebrated as the Nature Notes correspondent of The Guardian newspaper. It takes strong personalities and determination to run annual village shows such as ours, held on the third Saturday in September, and the success of that show is down to the voluntary energies of a totally fearless gang of local organisers.

Children who have attended the village school will have fond memories of redoubtable but kind and skilled teachers. The commitment which delivers an annual bonfire celebration, the impressive Bale Fire event of July 4th (midsummer on the “old” calendar) and a series of locally written, produced, acted and staged village plays is impressive by any standards.

We all like to think that our own community is special and different whether it be a vibrant urban square, a suburban oasis or a rural idyll. However, very few villages can boast Whalton’s confidence, inventiveness and resilience. There are many good reasons why people like living here and being part of a place which is comfortable with itself and which faces change with equanimity is a pretty good one.

The following is a description of Whalton written in 2003 by local writer and journalist alias Veronica Heath, Nicky Blackett who lived in the village in Seven Stars.

Whalton today is an exceptionally pretty, well-kept conservation village of sandstone houses lying on either side of a long, narrow village green. The village green is typical of Northumbrian village layout being in part economic where marts were once held for the sale of sheep and cattle and also defensive.  The enclosed building form was there to protect livestock and people from raids by the border Reivers between the 13th to the 17th Century.

To the East end of the village Whalton Manor was created out of four old stone houses by Sir Edwin Lutyens in 1908-9 and the stunning gardens were designed by Gertrude Jekyll. The wings of the Manor House have not been greatly altered, but the upper and lower hall and a circular dining room help to draw the house together.

Further to the west, The Old Rectory was built around a fortified pele tower. Rectors in past times who lived there had their own access footbridge crossing the road to the church. This bridge was demolished in 1940 and a new Rectory built in the 1960s.

The church of St. Mary Magdalene is mainly 13th Century, although traces of 12th century stonework can be seen. The Church contains memorials to the Ogle family who held Ogle Castle in Whalton’s sister parish of Ogle just a mile or so to the south. Survival of medieval church fittings is uncommon in Border districts but at Whalton there are a few pieces of plain medieval glass in the east window of the south aisle. Visitors should also note the fine one-handed turret clock. This was a gift from a Major Bates of the Inniskilling Dragoons who built nearby Milbourne Hall in 1807. St. Mary Magdalene Church has seen growth and change for more than 800 years in Saxon, Norman-French, Latin and English, parishioners have been baptized, instructed, confirmed, married and buried with essentially the same order as today.

At the West end of the village, the Beresford Arms, the name of which is a reminder that one of the landowners in these parts was Lord Decies whose family inherited land once belonging to the Delavals of Seaton Delaval Hall some 20 miles to the east. Sixty years ago, there was also a Temperance public house, the Seven Stars now a private home, with tables and a cobbled yard where parishioners could leave their horses on the Sabbath and walk round to the church. 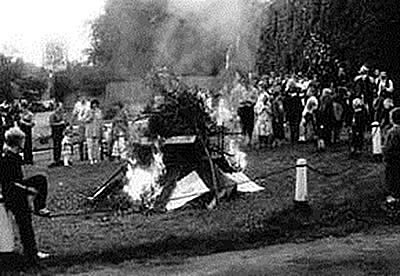 The BALE fire takes place on 4th July every year; Whalton is the only village since 1903 to have maintained the ceremony which is a relic of the round of seasonal fires with which the ancients greeted the progress of the sun through the year. The word ‘bale’ originated in Northumberland and was used describe beacon fires lit on castle, pele and hill top to rouse the country when raiders were spied riding over the Border. School children hold hands to dance around the fire - they used to leap through the flames but this tradition has been given up!

Whalton is commuter distance from Newcastle upon Tyne and many families with young children now live in the village. This has revitalised Whalton C of E first school, now rated as Excellent by Offsted.

The Whalton Kern Baby was a much-loved celebration of bringing the harvest home up until the First World War and in 1902, British photographer Sir Benjamin Stone captured her on camera as part of a project to record local customs for posterity.

In 2016, to celebrate Her Majesty Queen Elizabeth II’s 90th birthday, artist Faye Claridge (www.fayeclaridge.co.uk) brought her magnificant 15ft sculpture, Kern Baby, to Whalton.  Supported by Arts Council England the Kern Baby’s return to Whalton followed an acclaimed exhibition at Compton Verney (www.comptonverney.org.uk) and was celebrated by everyone in Whalton culminating in her involvement in the annual July 4th Baal Fire (although she was far too precious for us to burn her).  Whalton is the only village to continue the ancient tradition of Baal Fire’s that celebrated the success of bringing the wheat (corn) harvest home. The last of the corn gathered at each year’s harvest was used to create a human form.  Dressed in fine clothes this was the Kern Baby or Harvest Queen which was thrown on the Baal Fire and a new one made each year suffered the same fate.  The story of the Kern Baby’s journey to Whalton and the celebrations that accompanied her return can be seen in this video.

Artist Faye Claridge said, “I loved the Benjamin Stone images from Whalton and was inspired to make several art works from them. “It seems fitting to bring the Kern Baby to her ancestral home more than 100 years after Sir Benjamin photographed the original. “I hope her rebirth allows Whalton to reclaim her from the archive. She represents beliefs, communities and legends that deserve to be re-examined.”

Click on this link to view some drone footage of the beautiful village of Whalton: Whalton Village 2019